Research and production company
development and manufacturing of the veterinary drugs

The newspaper "Rural life" of the Vokhomsky district of the Kostroma Region
I. Migutina 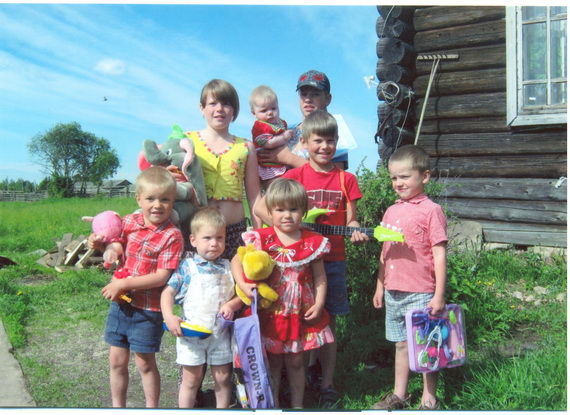 The house of the Scriabiny-Fatievy is like a kindergarten. Four-year-old Alyonka, a good looking girl, babbles tirelessly, tries to tell everything in her children's language. Five-year-old Vladik is Alyonkin translator, he interprets, explains, corrects his sister, like an older brother! Talkative six-year-old Nikita nurses the kids – Oleg and Sonechka. The three of them diligently assemble a pyramid, play with children blocks, look through colorful book. Two-year-old Olezhka knows a lot of words, tries to speak in sentences and copies his brother's behavior.

The mother has enough worries even with such assistants – to cook breakfast, to take care of the cattle, to get the elder children ready for school... Alexander Vitalievich is a machine operator, busy in summer and in winter as well. The salary in the Agricultural Production Co-Operative is small. Like most peasant families, they live at the expense of a personal subsidiary farm. They have a vegetable garden, potato field and their own farm – a cow, a heifer calf, some piglets and chickens.

Fourteen-year-old Ivan and eleven-year-old Anastasia are the senior cowmen in the household; they are experienced in milking a cow or giving water to calves. Maxim is nine, but he often takes care of chickens and a vegetable garden. Nadezhda is the oldest of the children – she is sixteen – she is a first-year student of the Kostroma Engineering College. She also helps the family in her free time.

Milk, sour cream and cottage cheese are always on their table, and there is also meat. But it is not always possible to treat children with sweets or new things. Needless to say, the family lives poorly. How many clothes, shoes, school supplies, toys and at least the simplest sports equipment do fast-growing boys and girls need?

A government-built cottage might seem quite spacious to someone: it consists of two parts (winter and summer one), with four rooms. But it's a little tight for such a family. Even the kids have to do their homework one at a time at the same desk. Due to the lack of material resources, renovations were not done for a long time. And now they have decided to issue a subsidy for the construction of a new house. While parents are gathering all the necessary papers, children are making drawings of rooms, hallway, the kitchen.

One day the family found itself under the kind patronage of volunteers from Moscow. The chairman of the Agricultural Production Co-Operative Trud A.V. Shadrina appealed to the chief veterinarian of the district, deputy of the district assembly and chairman of the district Board of Trustees V.N. Khudyntsev with a request to help get the children ready for school. In turn, Vladimir Nikolaevich told his friends in Moscow about the problem. The request did not go unheard. The kids went to school in a new uniform, with new bag packs, textbooks and school supplies. So, the employees of the Moscow Research and Production Company SKIFF manufacturing veterinary drugs started helping the Scriabiny-Fatievy family. On a New Year's Eve, a washing machine with a ten-kilogram pack of washing powder and a large two-chamber refrigerator were handed over to this family in Andrianovo. And in the spring they presented bicycles for the brothers Nikita and Vladik. Soon the children received the next gifts – clothes, wonderful books and encyclopedias, and also the sets for needlework. The gifts were unpacked by the whole family, and everyone got a toy for their preference and age.

The management of Research and Production Company SKIFF traditionally collects gifts for the distant Vokhloma twice a year - on the eve of the Children's Day and on the New Year's Eve. These gifts always have sweets: candies, chocolate, cookies. On another holiday, the family was able to buy a cow, because they received eighteen thousand rubles as a present at the right time. The house now has bunk beds, a TV and a new linoleum. Volunteers from Moscow assured the head of the family that they would provide all possible assistance in the construction of a new house.

The Scriabiny-Fatievy family is the only family in the Vokhomsky district with nine minor children. Maria Ivanovna herself sees nothing heroic in this. She believes that children are a very natural event of life. And what is there to live for if there are no children?...